Why I Never Plan More Than 48 Hours in Advance

Traveling with a plan has it’s advantages, first and foremost you will always know where you are supposed to be, what you are supposed to do, where you are going to be, and what you are going to be doing at any given point in time. Traveling with too rigid a plan, however, means that you are unable to take advantage of spontaneous opportunities and unplanned events, both those that are fun and exciting and those that, at the time, are annoying hassles. I have found that the perfect balance can be struck by having a general plan (i.e. I will travel north to south from point A to point B over X amount of time) while figuring out the specifics of said plan no more than 48 hours in advance. This way I do not have to turn down an invitation to a braai (BBQ) or a beach house tomorrow because I booked five nights of accommodation in a given place yesterday while, at the same time, if such an opportunity does not materialize I am still able to do my own thing by following my own plan.

Now, while it is all well and good to write in hypotheticals this is a formula that I, in my own experience, have found to be tried and true, time and time again. Indeed, my current trip is an apt example. At the moment I write from Harare, Zimbabwe, a place that I had neither planned on visiting nor, to be quite honest, had any desire to. That I am here at all is the end result of a series of happy accedents that began somewhere along the Wild Coast in South Africa.

My original plan had been to get to Cape Town, circle back to Johannesburg, and take a bus to Maputo, in Mozambique. However, while on the Wild Coast, and, in fact, during my entire sojourn to Cape Town, I kept hearing fantastic things about Namibia. Going there had not even crossed my mind, I had no idea what was there, or what I could do once I got there. It soon became apparent that Namibia was an adventure travelers paradise, dune boarding, skydiving, hiking fish river canyon, driving the skeleton coast, seeing dinosaur footprints, and ancient rock art only began the list of things that the country had to offer. Flash forward two weeks and, accompanied by another traveler whom I had enlisted to my new plan, I found myself on a 22 hour bus to Windhoek, the capital. With no idea how to proceed and neither the time, nor the money, nor the desire to take an organized tour we then found ourselves with a rental car, a map, and a few days to kill.

After my time in Namibia it no longer seemed like the logical choice to pick up my original plan where I left off and head back to Johannesburg and I started asking questions of the other travelers I encountered. Specifically, where else in Southern Africa, which I had not previously considered, should I go? That simple question has, in turn, led me on an adventure through the Okavango Delta in Botswana, a ferry across the border into Zambia, Victoria Falls, and the ruins of Great Zimbabwe. I have been able to spend the night with a family in Ghanzi, Botswana, hitchhiked across hundreds of kilometers, learned how to fix a truck engine, and eaten zebra, to mention a few highlights.

The opposite holds true for many of the people I have spoken to who are on organized overland tours. Now, let it be said, overland tours are great, I myself will be signing up for one or two during my time here in order to go on safari in the sarengetti and climb Kilimanjaro. What I am talking about concerning overland tours is purely the fact that they are, indeed, organized. You are told when to wake up, when to eat, where you will go, when you have free time, where you will sleep, etc… For the next 7, 14, 21, or 40 days. Again, there are advantages to tours, you can get to and spent time in places that would otherwise be inaccessible to someone, like myself, relying on public transport and the kindness of strangers alone. But, time and time again I have heard people on organized tours express the desire to return to location A, B, C, or D in order to do something that the tour had not done or spend time in a place that the tour had merely passed through. Granted, I have rarely heard a traveller not express a desire to return to a place that they had enjoyed, but it is a different sort of desire to return to a place from which one has truly fond memories as opposed to a place that one is not sure if they like or not because they barely experienced it. Additionally, such an organized tour is limiting in that one rarely has the chance to interact with those strangers whom I, as an independent traveller, find make my travel experiences the most rewarding.

While I use the most extreme example of organization to illustrate my point about the benefits of fluid, unstructured, travel, I find that overly adhering to a set “plan,” even in it’s more modest permutations, is often detrimental to the travel experience. This is especially true when events do not go according to plan as, for example, in the event of a breakdown. Planning to get from point A to point B by 9am, going to swill by 11, sunbathing on the beach by 2, and having dinner by 5 is completely upended when said bus breaks down 5 hours into a 10 hour journey and the repairs will take as long as they will take. The flexibility afforded by the 48 hour mindset renders the arrival time inconsequential and transforms the breakdown into part of the experience as opposed to the planned mentality, which can think only of a ruined timeline, the hassle, and the inconvenience of the event.

It must be said, however, that even the most plan oriented traveller often looks back with hindsight and considered such a breakdown to be one of the most memorable, exciting, and authentic anecdotes that they can tell others about there trip. As, for example, happened when I tried to get from Maun, Botswana, to Livingston, Zambia, in one day.

Upon arrival in Nata by bus from Maun where I was assured that my traveling companion and I would be able to catch a bus to a town called Kasane near the border we discovered that we were stranded because all of the busses were full! We also encountered to other travelers who were also stranded one of whom was particularly distressed because they had only budgeted two nights in Livingston and were on a tight schedule. Some eight hours later, beer in hand, as we found purse cap’n the wrong side of the border, which had closed at 6, he was laughing at the whole experience including, but not limited to, hitchhiking and fitting four in the back seat of a pickup meant for three people, having a run in with the Botswanan police because of said overcrowding, and trying to locate a place to sleep after dark in a town known for having hippos loiter near main street. He went from the attitude, I hate travel and I’m never doing this again to hells yeah I wonder what happens next time as soon as he learned to let go of the schedule.

All in all, and as this last example illustrates most succinctly, it must be said that the 48 hour rule is more a state of mind than an actual planning strategy. It is, most simply, the adoption of the mindset that what happens today is the most important, that it is a nice idea to have an idea of what will happen tomorrow, and that what happens afterwards is, frankly, something to be worried about…later. 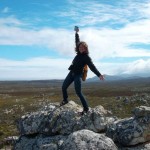 Kristine Palmieri is an avid traveller and (future) historian who spends every second not working or studying on the road. A New York City native, she has also lived in Berlin, will shortly be moving to England for her Masters, and has ventured extensively through the Americas, Europe, the Middle East, Africa, India, Australia, and New Zealand. She also makes periodic attempts to keep up her own blog, It Seemed Like a Good Idea At the Time. Check out her blog at http://kp806.wordpress.com/