When Travelling Moves You – El Salvador

It was a day I had been looking forward to since the start of my trip through Central America. Today I was heading to the north eastern region of El Salvador to visit one of the places most devastated by the Salvadoran civil war which ran from 1980 to 1992. It was to be the most emotive day I’ve experienced on the road.

My journey north from the city of San Miguel was less than comfortable for a few reasons. Thanks to there being no such thing as a full bus or pick-up truck in El Salvador I spent a good hour squeezed into vehicles and becoming very well acquainted with various parts of my fellow passengers’ anatomy, as they did mine. The searing heat didn’t make it any less unpleasant so when the pick-up finally arrived in Perquin, I breathed a sigh of relief as well as some long-awaited fresh air.

The first thing I noticed about the region was its beauty. Sitting high up at an altitude of around 1100 metres it is home to lush coffee plantations, gorgeous mountainous views and, as a wander into the centre would show me, some incredibly friendly people. Unfortunately, its recent history is not so pleasant. In fact, it’s at least in part due to its location that it became a hive of guerrilla activity during the civil war. This, of course meant it was a big target for government troops.

I walked uphill through the dinky, cobble-stone town square, its precious primary school in the middle, small children scurrying around, every face with a smile on it, and I felt a real sense of community. In stark contrast, sombre is the only word I can use to describe the atmosphere inside el Museo de la Revolucion, a museum put together by locals paying tribute to thosewho died fighting, many of whom were family members.

The museum contained all manner of artillery from rifles to machine guns and hand grenades to anti-tank weapons – all items actually used in the conflict. They had a display of uniforms which were the very same ones worn by the guerrilla fighters and to say it was chilling to see these stained, torn garments laid out alongside battered radio equipment would be an understatement.

Outside, were wreckages of two helicopters and beyond that the Hill of Perquin, home to numerous bomb craters, bunkers and even an old medical facility which was no more than a large hole in the ground. I suppose it’s that feeling of knowing that as recently as the 1990s this was life for the people of Perquin. This was their reality and here was the evidence.

As sad as it was to see and hear about what went on during the war, it was nothing on what I experienced later in tiny El Mozote, just a few miles away. This was a village that the government decided to make an example of by carrying out a mass slaughter of its people on 11th December 1981. They used the most unspeakable methods to do so and the only known survivor from that day died in 2007.

I was dropped off by a scooter-taxi and was greeted by the most eerie of silences. El Mozote was a ghost town. As I stepped onto the dusty road that goes through the village, a teenage boy emerged and offered to tell me about his home and its brutal history – naturally I accepted.

First he showed me the densely flowered memorial wall which had the names of all the families who were killed and, at the front, in the centre, stood a silhouette of a family of four holding hands. He told me that it wasn’t until the 1990s that mass graves started to emerge and the number of bodies found eventually reached around 800, over half of which were children.

Just a few metres away, there was a small church on the side of which was a cheery, care-free, and brightly coloured painting of children playing. The sort of thing you might expect to see at a nursery or school playground. Beneath these images though, were the names and ages of the children who had been murdered – many of whom were only months old. The wall madeup part of el Jardin de los Inocentes, which means the Garden of the Innocent, and was created because it was here that the remains of 146 bodies were found, 140 of them were less than 12 years old. It was impossible not to shed a tear.

For many years the whole thing was denied by the government and it wasn’t until as recently as December 2011 that they formally apologised for what happened.

Having taken it all in, my overriding feeling was shock got on the bus to leave. I felt almost dazed at what I’d seen and heard that day. I remember wanting to share this with the world, tell everyone about the inhumane brutality of it. Before I left El Mozote, I bought a wristband from an elderly lady near the church. It was plain except for the words “nunca mas” meaning“never again” and it’s a line you see written wherever this tragedy is mentioned. The idea is as long as they keep the memory alive then it will never be forgotten and won’t happen again. I wear my wristband everyday. 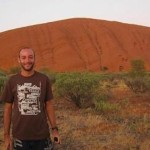 Richard Leighton is a wannabe vagabond currently living and working in London. With ambitions of being location independent, a combination of solo and group travel has so far taken him to South East Asia, Australia, New Zealand, Fiji, Central America, west coast USA and smatterings of Europe. After gaining a psychology degree, he went to Mexico as a volunteer English teacher and so began the travel addiction. Always pondering his next move, he's a hammock enthusiast, serial sunset photographer and absolutely loves a bungy jump. You can follow his journey at vagabondrich.wordpress.com and on Twitter @Travel_Rich.

Road to Romance: Falling in Love while Traveling