What I Learned from Backpacking the World at 16

When I was 16, I decided I would run away. However, I didn’t just head over to the neighbours house or to the next state. Instead I ventured though Europe, the Middle East and Africa. It was a journey that opened my eyes to the world and changed my life. Not only did I learn the street skills necessary in order to survive and travel with no money, but I also learned about people and life, and in doing so, I learned about myself.

1) The Best Food Is In The Dumpster

Before getting into the deep philosophical stuff, here is a practical and highly cost effective lesson. Thanks to another runaway, I learned that depending on the time of the week, dumpsters behind supermarkets can be filled to the brim with pre-packaged sandwiches, juices, fruits and other perishables that are only a few days past their expiration dates. Not only is it the best because it’s free but since ‘hunger is the best sauce,’ it is also incredibly delicious.

Being alone on the road at 16, with no responsibilities, I had no reason not to experiment with drugs. The more depressed I became the more drugs I did. I allowed my mind to spiral down into an ever-increasing abyss of unhappiness. Although it took a while, I finally realized that drugs only provided an artificial and transient happiness. Essentially, drugs prevented me from discovering true happiness on my own.

3) The Poorest People Have The Biggest Hearts

The poorer the country I visited, the more welcoming and giving were its people. Countless people from Syria to Egypt invited me into their homes. Though they hardly had enough to go around, they always made sure I was well fed and warm. Since they know what it’s like to be cold, to be hungry and to suffer, they truly know compassion.

I never truly believed this until two birds simultaneously crapped me on shortly after stealing a cell phone. After a few more similar experiences, such as having my bag stolen while hiding in the train bathroom avoiding ticket agents, I stubbornly accepted the truth of Karma. That being, though cliché, “What goes around comes around.”

5) Not All Homeless People Are Crazy

When I was living in a squat in southern France, I initially believed that all my tent mates, Steve, Wizard, Rasta, Leppy, and the other Steve, were completely insane. While it turned out that half of them actually were nuts, specifically Wizard, a cross-eyed schizophrenic with Tourettes, the other half were simply victims of some terrible event, like the car crash that killed Steve’s family. The sane ones took care of me, and for that I am forever grateful.

I had not ingested anything for three days straight. I was exhausted, dirty and down on life. Out of nowhere, a kind shop owner offered me a Coke. The sensation of this high-energy life-sustaining beverage that tantalized my tongue and surged through my veins offered me an indescribable happiness. It was then I realized the relativity of life. I understood that without sadness I could never know happiness. So I accepted the bad times always knowing that things would get better.

7) People Are People No Matter Where You Go

The media and Western perspectives had left me confused about what to expect from the Middle East. While I tried to enter Syria with an open mind, fears of anti-American Muslim extremists dominated my consciousness. However, the more I got to know the people of Syria, Jordan, and Egypt, the more I realized our shared humanity. That being, that we all share the same needs and desperately seek to connect with one another and in doing so ease the pain of our lonely life paths.

8) Happiness Comes From Within

I naively believed that happiness would lie in a place. And so I kept travelling to different countries with the hope of finding the elusive happiness I so desperately sought. While after crossing each border I was greeted with an initial burst of euphoria, as the days past, I reverted back to my old depressed routine. Eventually, I learned the truth of the old saying, “The grass is always greener…” That being, if you’re not happy where you are now, you’re not going to find it no matter where you go.

9) Trust In The Universe

In the beginning, I was always worried about what I would eat next and where I was going to sleep at night. However, after a few weeks on the road, I realized that I was on a path and that everything I did and everywhere I went was meant to be. Food and shelter would always come when I most needed it and things always tended to work out. I stopped worrying, began to trust and that’s when I truly began to enjoy life on the road.

Upon returning home, I was able to comprehend the relative wealth I was blessed with. I was determined to make the most of the resources at my disposal. I started a delivery business, got an education, and later began my blog, The Runaway Guide.

There is no better education for the mind and soul than travel. It grants one an invaluable perspective about oneself and the world. And because of this, I don’t regret running away from home at 16. However, I cannot advocate it as a substitute to high school or as a healthy life path. For one, it was a trip full of suffering, for my parents and myself. It was also very dangerous. I nearly lost my life to drugs, nearly drowned and was nearly shot by police. In closing, I hope everyone will travel at one point in their lives, just not quite the way I did.

For more about Leif, his life and adventures check out his blog, The Runaway Guide. 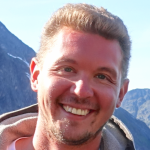 When Leif was 16 he ran away from home and explored much of Europe and the Middle East without a dime. He is currently working on a book about this adventure as he continues to make new ones traveling the world. Through his experiences, advice and adventures, he hopes to prepare, empower, and inspire others to travel. Visit RunawayGuide.com.

Backing Up and Protecting Your Files On The Road

Tips to get you started teaching English in South Korea

Swimming with Humpback Whales in Tonga