An American tourist of no small means rides a decrepit bus, from one impoverished village to the next, the engine threatening to stall whenever the speed drops below 5mph.  The bus, older than he himself, is brilliantly painted in all of the primary colors and adorned with an excerpt from the New Testament.  The seat beneath him lacks springs, his cushion is threadbare, and the metal frame strikes deeply into his leg at every pothole.  The smell of leather tinted in sweat and cheap cigarette smoke fills the air.  When the bus stops, which is frequently, the heat inside reaches unbearable levels, and sweat pours down his face.  Bluish wisps of hot exhaust from the ancient engine waft upwards through fissures in the rusted floor, and hang heavy in the interior, settling into the hollow spaces and mingling with dust from the unpaved road.  Somewhere behind him, among the luggage, a chicken can occasionally be heard struggling in a sack.  The sweat and dust have formed a near invisible veneer on his exposed skin.  By all reason, he is uncomfortable, exhausted and unhappy.  By all logic he is thinking of plush motor coaches, air-conditioned, and with tinted windows.  By all estimates you could be forgiven for assuming this.  But you would be wrong.

The man does not care that his cushion is practically missing.  He has not sat down in 6 hours and he relishes the chance to do so now.  He does not notice the smell, for he himself has not bathed in 2 days, and even then, it was merely a quick dip in the ocean.  He is eying the ticket woman who moves lazily down the isle collecting coins and chatting with the locals.  The bus struggles on, the aching engine seemingly kept alive by the collective will of the riders.  When the bus struggles up a steep slope, they mouth silent encouragement.  Some stamp the floors or strike the sides as if urging on a dying horse.  When the bus breaks down, they sigh as one, yet sit quietly in the heat and settling dust as the driver dismounts and disappears under the hood to make adjustments with a hammer.  In the stillness the air is stifling.  Finally the bus coughs and grinds forward amid an explosion of cheering.  The driver wipes the sweat from his brow and throws a knowing glance over his shoulder, treating them to a grin.  The man smiles to his fellow passengers, strangers no longer, united in the uncertainty of travel.

As the revived bus gathers speed down the reverse slope, the cool air begins pouring through the open windows.  At first it comes in tantalizing rivulets, teasing and flirting with bare skin, but with acceleration it cascades rearwards, washing over the passengers and blessing them with relief from the heat, from the exhaust, from the dust.  Cool air on dripping sweat momentarily provides a contentment that cannot be measured or bought by any currency created by man.  The man concentrates on the coolness.  He disappears in it.  At this moment he begins to love the dirt, the dust, the smell of the exhaust, the noises of the chicken and the curses of the driver.  The struggling bus is his dear friend and its stinking passengers his colleagues.  He cant and wont imagine being anywhere else.  He would not trade an hour on a sleek climate controlled bus for 3 hours on one such as this, even if both were free.  For five minutes he is in ecstasy, then the motor coughs, shudders and the bus coasts to a stop again.  This time the man doesn’t take notice of the driver as he curses and stomps off the bus.  He is too busy contemplating the candy bar and warm can of beer in his backpack and guessing at when and where would be the ideal time to indulge in this vast treasure.  A motorbike overtakes the indolent bus, and dust floats gracefully through the windows and settles all around him.  He does not notice.  As the driver coaxes the engine back to life his thoughts shift again.  He has just realized that his stop is next and there is no chance the fare collection woman will reach those in his seating section before then.  His heart races and his mind stutters at the prospect of what wonders he can surely buy in the village market with the money he now won’t be handing over for the bus ride. 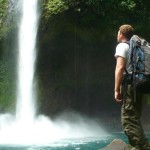 When not traveling, Greg Quinion works as a technical writer and analyst. Since being bitten by the travel bug he has backpacked, lived in, or visited over 45 countries in Latin America, Asia, and Europe. He currently resides in Northwest Connecticut.

Five Places You Shouldn’t Miss in the Philippines

What I Miss About Xi’an, China