If you’re interested in new experiences, making some money and seeing the world, teaching English abroad could be for you.

I’ve just returned from living and travelling overseas for the last year and a half. The typical question I get asked is “How was it?” to which I can only respond, “It was phenomenal!” At some point, the discussion turns to my experience teaching English in South Korea. I’ll sum up my enthusiasm by saying: best. decision. ever.

Earlier I wrote an article for this very site on teaching English in South Korea. I believe the article influenced Mike (Editor in Chief at Art of Backpacking) since he’s off to China to teach English to university students!

I finished up my teaching contract in South Korea in February. Since then I’ve travelled through most of southeast Asia and am now back in my home town of Winnipeg, Canada, looking to shoot a movie and to start a movie business. I thought I’d write out some of my experiences of teaching English abroad in case you’re a fresh graduate, close to graduating, or just looking for a change and new experiences.

[pullquote]I would do it again in a heartbeat[/pullquote]First, did I enjoy myself? Yes, absolutely. I met a lot of great people from around the world and had a lot of fun teaching kids English. I was surprised at how much I actually enjoyed my teaching experience. Even though at the end of my contract I was ready to move to another country, I would do it again in a heartbeat. Being a Canadian citizen, a native English speaker, and holding a M.A., well, throw a dart at the map and chances are there’s a job for me there. That’s the way it is right now. I don’t believe it will always be that way. As a matter of fact, perhaps Chinese will become the next in-demand language.

Some people are concerned about not knowing the local language. Well, it’s not necessary, but it really helps. In places like Taiwan and Thailand, you can get away with not knowing any of the language because English has been so widespread there. In South Korea, not so. The country’s been closed off and only (in the last couple of decades) opened its doors to foreigners teaching English. They run a government program (EPIK) which places you in a public school with a co-teacher.

My experience was very positive in this situation, except for the times that my co-teacher was so busy that she would leave class mid-way, and I had to pick up wherever she left off. Sometimes it was confusing, but, by month 3, I was able to do that sort of stuff.

The next time you’re not being promptly served in a foreign country maybe it’s because the staff is doing rock-paper-scissors to see who gets to deal with you. I’m not saying learn the entire language, but a few verbs, nouns, and adjectives would get you by. And by the way, don’t expect to rattle off a great sentence that you practiced on the plane ride over and then understand ever word the other person has to say. Nope. A few verbs, nouns, and adjectives will suffice.

And how about all the different foods you’ll encounter? The best thing to do is to try it first, then ask what it is. That was the best way to try cow’s intestine. Do they eat dog in South Korea? Yes, but you have to go out of your way to find it since many Westerners are repulsed by the thought. In Cambodia (where I volunteered for a month), I made the mistake of asking what one food was and was told that it was tarantula. So I only tried a leg instead of the whole thing.

Teaching English is one of the few lucretive international jobs you can get with quite easily. Yes, in South Korea, the money is good if you don’t spend it all on partying or on stuff that you might not need. Just think, if you buy it abroad and plan to return home, you have to pay shipping costs or try to sell it. In South Korea, I had my expenses down to about $800 a month so I could bank about $1k a month, which then paid for most of my trip through southeast Asia.

Pretty good I think, and not something I’d be able to do in Canada. Some people I’ve told this to have said that’s not bad, but not very good either. Well, for a 27-year old bachelor with no expenses and no debt, it’s pretty good. I hear you can do the same in Taiwan. The Middle East is also becoming a lucretive market for teaching English. Thailand? You’ll make enough and party pretty hard but I don’t know about saving money there. Currently, I’m looking to Saudi Arabia.

Will taking a year off impede my career development? Some people told me that I was taking some time off “from real life” when I applied to be an English teacher. Some of my friends say that they wish they could “run away” like I did. Wow. Well, all I can say is: “this is life, exactly because I’m living.” Blantantly obvious, stupidly simply, yet even I needed to go abroad to see that just because you’re educated in one field, have experience in another, doesn’t mean that you are trapped doing the same thing for the rest of your life.

If anything, from what I can see, the world is getting a whole lot smaller. Plus, it really depends which career you want. Some international experience doesn’t hurt, and probably can help you in an interview. These days, some employers would like to have people who can travel successfully. For me, I was concerned mostly with finding a job that was far from home, paid a decent wage, had a good music scene and an independent movie industry. I found all of those in Busan, South Korea. While there, I was really far from Winnipeg, had a well paying job, joined a jazz/blues band within the first few weeks and was able to complete two short films. One short film was a class project for my advanced grade 6 English class. It’s titled Coffee and Milk and is about an English teacher and one of his students each having a bad day.

Those six points sum up my experience teaching English abroad. My time abroad was a great experience and I don’t think it’ll be the last. This summer I’ll be working to make a feature length movie, but you can be sure that I have one eye on the international job market, especially teaching English. 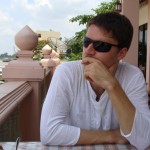 Steven Sirski is a freelance writer, director, musician and tractor driver. He just came back from Asia after a year and a half abroad and is currently setting up his own film business and raising funds to direct his first feature length movie. You may read his blog, including movie updates, at Steven Sirski website , contact him at stevensirski (at) gmail dot com, follow him @stevensirski or like him on Facebook.

Tips for Locking Up Your Backpack

Holiday Travel: Hong Kong and ‘A Symphony of Lights’ at Christmastime

Why I Can’t Constantly Travel And Own A Business