Quitting My Job to Hitchhike Europe

In 2012, I was teaching English in a private language school in South Korea. Compared to the cost of living, I was making good money. Even after going out for dinner and drinks several times a week, I could still afford to go away on the weekends and transfer a bit of money into my UK bank account at the end of each month. It wasn’t a lot of money by UK standards, but it was something. When so many graduates in the UK were struggling to get by, I realised that my life was very comfortable. But I didn’t want to be comfortable.

As a teacher’s one year contract draws to an end, they work hard to arrange an improved contract for the following year. Instead of doing that, I decided that I would quit my job, leave my home in Korea, and hitchhike Europe. It was a whimsical idea that popped into my head when I missed an early morning bus in Japan. By missing the bus, I learnt that Japanese trains are incredibly expensive, hitchhiking is lots of fun, and drinking sake inhibits one’s abilities to find bus stations.

To my family’s great surprise, I hit the road with nothing but my backpack nearly two years after completing a Masters in Mathematics. ‘Is this what all maths graduates do?’ they wondered. When I started my hitchhiking journey, I didn’t know Europe well. I figured that by travelling from A to B for free, I could make my money last for over a month and have a great time. My friends told me that I would be robbed and tied up or maybe even worse; in short, they told me not to go on this journey. Hitchhiking alone to Eastern Europe is not considered the ‘done thing.’ If I was unfortunate enough to encounter my death on this journey, I thought it would be nice to leave some pictures behind so I bought a nice camera and took far too many photos of my face. Having survived the ‘ordeal,’ I made them into a video to show that I was actually enjoying myself and meeting some pretty wonderful people. If you don’t believe me, watch the video below!

I wasn’t tied up, robbed, or molested. Not one single time. And best of all, my month long journey didn’t last a month. It continued for over five months during which time I met friends and made memories that will last forever. On my first night on the road, I was dropped on the outskirts of Brussels at around four in the morning. I pitched my tent by an abandoned building and from that point on, realised that I didn’t need to pay for accommodation. I slept under bridges, next to the Eiffel Tower, on beaches, in vehicles, and most of all, in the homes of lovely people in over twenty different countries. Most of these people were strangers I met through Couchsurfing but others were people I already knew, friends of friends, or people I met on the road.

Almost everyday of my journey became a story in itself. Except for four weeks of volunteering between Poland and Hungary, I didn’t stay in the same place for more than three consecutive nights. Most often, I stayed in a place for two nights in order to give myself time to explore and then left before I had time to get bored. Over two hundred people drove me in their cars and each week, I was interacting with individuals from all over Europe. For the one week I made a list, I wrote down over forty individuals that I had interacted with at length. Some weeks my list of people would have been much longer. Occasionally, it was shorter.

If I was pressed to find a highlight of the journey, I’d have to say that that it was the freedom I experienced. The freedom to not have to do anything or to not have to be anywhere. Because I had my tent, I didn’t even have to be in a particular place to sleep at night. To do only what you want to do, is true freedom. By being free, I was in a way, busier than I could have been if I wasn’t free. I was busy doing things that I wanted to do.

One thing that I found during my journey was that I was never bored. I never had ‘nothing to do.’ But I could choose to do nothing if I felt like it. I could do exactly what I wanted to do. I herded cows under midnight, made bonfires on beaches with strangers, washed myself in ponds, and said yes to everything.

I do not regret quitting my job. I do not regret leaving my home. If I had to regret something, it would be that I am not still hitchhiking now. I learnt to live with very little money and in the end, what caught up with me and stopped my journey was the cold weather. Hitchhiking in winter is not fun when you have packed for a one month summer jaunt.

Whatever your fears and preconceptions about the world, let them go. People are wonderful and so is the world. Do what you want to do, not what anyone else wants you to do because life is a great adventure that you must live on your own terms. All you have to do is jump. 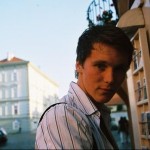 Jamie is the creator of GreatBigScaryWorld.com where he shares his stories and inspirations about his search to find adventure, overcome fear, and experience true happiness in the world. He recently wrote The Avant-Garde Life which can be downloaded for free from his website. It was written to help other people follow their own dreams by disregarding the conventional rules of society in the same way that he has chosen to do and features great advice from other people who have chosen alternative paths in life. Follow him on Twitter @jamierbw .

Yes, I’ve Never Been to Europe