Going back in time. The Museum of Soviet Arcade Machines in Moscow

We are walking down the street in not so popular among tourists neighborhood in the North-East of Moscow, the city where I was born and raised, and the one my husband learned to love. What are we doing here? The answer is plain and simple: we are going off the beaten path.

Once you’ve toured the Red Square for a few times, took tons of pictures in front of St. Basil’s, and bought your first matreshka on the Arbat street, you need to get out of this tourist route and see something you can really write home about. It is time for hidden gems.

We found ours: Museum of Soviet Arсade Machines. Located just a short walk away from Baumanskaya metro station, this attraction is not widely known even by the locals. Opened in 2007, this place will take you back to the Soviet era that, I’ll bet, you never experienced first hand. This is your chance!

It all started six years ago when two friends bought a broken-down Sea Battle game from a closing down acrade. The first exposition was set in the basement of Moscow State Technical University where Alexander Stakhanov, one of museum co-founders, studied. Stakhanov and his friends worked on finding precious machines and making them work again. Over the last years the museum has moved several times, until finding its current home in a airy industrial building that suits the idea perfectly.

We’ve getting in now. I have a mixed feeling of entering a hipster cafe where you can order Soviet-era classics like machine soda, and going back to my early childhood. The entry cost of 300 roubles (app. $10) per person bought us a cup of old Soviet 15-kopeek coins I haven’t seen for years. It gives you enough to play 15 games and allows you to spend unlimited time at the arcade.

The museum is now featuring 40 arcade machines from the 70s up to the early 90s. Some of them may seem weird and primitive to a Western gamer, some will remind you of the well-known classic games. You may not speak Russian but you will have lots of fun getting to know and playing what people used to play in the Soviet Union 30 years ago. My husband figured out how to play just fine. The place is not crowded but you may see some adults enjoying their childhood ideal world. If it is not a way to get to know a culture, then I don’t know what is.

We started with the popular Morskoy Boy (Sea Battle) where the goal is to sink a submarine, then moved on to Vozsushny Boy (Aerial Battle), Torpednaya Attaka (Torpedo Attack) and many others.

Not all the games are computer-based, for example, “Repka Silomer” (Turnip the Powermeter) based on a classic Russian fairy tale. A thing like that you are more likely to expect at an amusement park or boardwalk but it is different and highly entertaining. Another Soviet classics are sport-themed games like hockey or basketball. They are so simple but offer this pure joy of playing you can’t always find in modern era’s advanced video games.

Some games are good for two players, and after watching my husband having a great time, I decided to join him and feel like 10 again. We played a racing game called “Magistral” similar to Atari 2600.

Done with racing, it was time for some good shooting. Dave checked out a hunting game called Okhota (Hunt), and I went on a hard challenge trying to prove that “the best Russian snipers are women”, and played a round of Sniper II. I have to admit I didn’t succeed much.

We spend more than an hour going from one machine to another, playing, laughing and just having a good time. If you are in Moscow, and want to get some authentic Soviet era experience, check out this place. It will please the inner gamer in you while making your trip to Russia really unique.

Would you go to this museum? 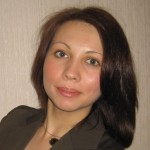 Marina Lukyantseva is a Moscow-born freelance writer and PR Consultant based in San Jose, CA. She is an official Blogger for Ostrovok.ru, a Russian online booking start up backed by Silicon Valley investors, San Jose International Travel Examiner, and contributor to various media in Russia and the States.

Marina is also running several blogs of her own: Kitchen Away From Kitchen where she shares her experience of getting to know cooking and eating traditions in her new country, Lazy Lizard Workout, and PROutook.

How I Helped My Little Brother Conquer His Fears

Tips to get you started teaching English in South Korea