We descended into the Red fog of Beijing around 8 o’clock in the evening, local time. Capital International Airport, located on the outskirts of the city, was impressive. Once off the airplane and through customs, my wife and I gawked at the facilities, which appeared to be a single aerodynamic building that stretched on forever. Originally, we were scheduled to fly in from Seoul in the wee hours of the previous morning. However, a last minute flight change was necessary as the night before I could be heard charismatically praying that what I was vomiting was indeed the pork I had ordered, and not the stray that had crossed our path just outside the restaurant.

We were greeted at the airport by our hosts for the week. A family of American expats from our hometown in the US, the Verseles were in Beijing working for a large European automobile company. Jessica and I followed them outside and dumped our backpacks into a waiting minivan. After a series of U-turns, honks, and a festive game of Eeny-Meeny-Miny-Mo with potential exits from the highway, Mrs. Versele, who had only recently acquired a Chinese driver’s license, steered the van into an unexpected area of Beijing. The first thing that caught my eye was a Best Western hotel logo perched high atop an ambiguous box shaped building. Further down the road was a shopping complex with a McDonalds, complete with drive-thru service. This was the first time I had seen such a thing in Asia. The American notion that one need not bother dragging the two large sacks of Quarter-pounders with cheese in the back of his pants 10 meters from the car to the front door has yet to reach Korea. China is ahead of the curve.

A couple of steakhouses and a few turns later we reached our destination. If I had not known better, I would have sworn we were entering one of the more pricy, cookie-cutter neighborhoods from Anytown, USA. The homes were ambiguous and uniform. They were large. Too large, in fact, to ever be mistaken as belonging to a local. The streets were clean and the shrubbery was neatly manicured. Attention was paid to detail in this odd sub-region of Beijing.

Two Chinese men tended the guard shack at the entrance of the walled compound. Each of them politely smiled and saluted, content to be ignored by the wealthy westerners who pass them on a daily basis. Their dress was typical. Russian-style fur hats. Knee length coats. All was dark green, except for black boots. The uniforms resembled those worn by the People’s Liberation Army. From the look on their faces, the young men were proud, and approached their jobs with a seriousness that only comes from gratitude. Their job, of course, was to keep China out.

Once inside the compound, we entered a well hidden parking garage below street level. We unloaded ourselves and headed through a door into the backyard of our home for the week.

A backyard? Is that grass? And a patio? And…a GRILL??

It was a strange sight, but not entirely unexpected at this point. This was not shaping up to be the Beijing, or the cultural experience, I had come for. But I would be lying if I said it was not a pleasant surprise. I could make an exception for a week. Only one week. No more.

We only get one week?

The rest of our host family, Mr. Versele and their three children, was waiting inside. A dinner of pasta, salad, and bread had been prepared, which we all enjoyed around the table together. Just like home. Beijing could wait until morning.

We awoke early on Sunday. The rest of the house was still sleeping. After showering and walking upstairs, we found the children already stirring about, playing video games, watching cartoons, and bickering as only young siblings do. It was almost refreshing.

Coffee is all Jessica and I generally require to be pleasant on most mornings, and after a cup or two we were ready to set out. Mrs. Versele was kind enough to drive us to the nearest train station, and after the 10 minutes spent figuring out how to purchase a ticket…

…we boarded and were off. It did no favors to our egos that the instructions were in both Chinese and English. The rail line was newly constructed and above ground this far out of the city proper. Eventually it descended underground, picking up more and more passengers along the way. This was our first real experience in China. Our first real Chinese experience in China, to be exact. We were a world away from the expat neighborhoods and money. The people on the underground train came in all shapes and sizes. Professional. Poor. Families. Beggars. Students. Children. Grandmothers. I liked this much better than what I had seen the night before.

We exited the subway at the Tiananmen East station and found our way up to street level. The sky was a brilliant blue. The sun was bright. I was happy, giddy even, despite the dry and bitter cold of a Beijing winter. Before we even topped the steps and set foot on the sidewalk, we had our next cultural experience. A university age girl approached and bombarded us with rapid-fire questioning…

How long have you been here?

What do you do for a living?

Do you speak Chinese?

Her English was impressive. One hand instinctively covered my wallet, while the other clutched Jessica’s arm. We indulged her inquiries, but continued walking all the same. She stayed with us pace for pace, and quickly got down to business: Have you traveled to the Great Wall? Do you need a tour bus? Long way to drive. Very cheap tours.

No thanks. Not today. Nope. Nada. Go away please.

She eventually gave up at the sight of another white person. We would learn to get used to being hassled to buy something, or take a tour, or give a kidney, or something else that we always declined.

When we were finally afforded the opportunity to stop and look, the gates to the Forbidden City were on our right. Across East Chang’an Street, the now famous thoroughfare where an anonymous hero stopped army tanks with a firm stare and two shopping bags, was Tiananmen Square itself.

We had a look through the Forbidden City, and then crossed Chang’an Street via the underground walkway.  Halfway through the passage, we approached a line of people waiting their turn to pass through a metal detector and have their bags inspected. Young Chinese men in military uniforms eyed every individual carefully. Not in the mood to sample Communist prison food (which I’m sure is quite tasty), we contented ourselves to wait and comply with the security measures. When our time came, the soldiers looked each of us squarely in the eyes, and motioned to follow them to the other side. We were confused. I could envision Jessica and I being hustled into a black windowless van where we would be scrutinized under bright lights and have our fingernails plucked with pliers until we confessed that we were actually American spies plotting to take incriminating nude photos of Hu Jintao. Much to our surprise, after walking past and turning back to find that no one was paying us any more attention, we simply marched up the stairs and popped out into Tiananmen Square.

It was peaceful. Quiet. Eerie almost. Perhaps the January cold kept visitors at a minimum. Or maybe the government downplayed the history and significance of the site and discouraged tourists. Tiananmen Square is the third largest public city-space in the world, boasting some 440,000 square meters of girth. We had a walk about the area. A few western tourists could be seen, but not many. There were groups of school children sprinkled about. They were accompanied by flustered adults waving small colorful flags and yelling instructions that went unheeded. Tiananmen Square is at the heart of Beijing in every way imaginable. Five large rings of highway circle around the capital, as if the Square was dropped out of the sky and created a perfect circle of roadways and infrastructure. Standing in this spot, Jessica and I were in the center of the Chinese universe, surrounded by imposing structures. Due north lies the Forbidden City, protected by the Tian’anmen Gate, and flanked on either side by bleacher style seating, where government officials take in the occasional military parade. To the South is the Qianmen Gate, much more grand and ornate than its partner across the way. Looking to the east: the National Museum of China.  West: The Great Hall of the People.

Oddly enough, I did not feel intimidated as we were enclosed by such intentionally intimidating Chinese icons. My attention was drawn, rather, to another spectacle. Perched upon the Tian’anmen Gate, judging the souls of all who pass through, was the infamous portrait of the Chairman, Mao Zedong. Mao is credited with establishing the now Communist state known as The People’s Republic of China. He is still considered an eternal super-man of sorts.

It was a world away from our families in South Carolina. I could not help but slow down and reflect on all of the events that happened in this place. Chinese history. World history. Yet in spite of all there was to process in this chapter of our adventure, the only thing I could do was gaze in wonder at the larger-than-life mole on Mao’s chin, and wonder who the poor shmuck was that died for immortalizing it. 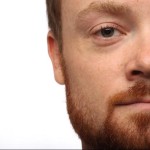 Jake Hollingsworth is an American English teacher and writer. A long time ago in a galaxy far, far away Jake was a bank teller, restaurant manager, and barista. When he finally got his head on straight, Jake married his best friend and two weeks later took a 15 month honeymoon to Asia.

Not seeing it all is okay for me