It is not a question of; will you be faced with some of your worst fears? You are travelling the world, it is merely a question of; when? My passion for travel has been with me since I was a small child and my mother swears I was my happiest sitting in my car seat and being on the road. It was no surprise that when I turned 18 I started to travel. I am now 26 years old and the fire inside still burns for a life on the road. One of my favourite questions often asked by non-travellers is, aren’t you afraid? My answer is “yes, sometimes” but my fears are always changing and my stories of over-coming them capture the imagination of even the dreariest souls. If truth be told I think facing my fears is just one of my many motivations behind travelling the world.

One of my greatest fears in life has always been a fear of heights. Even snowboarding down a black run gets my heart palpitating, leaving an obvious sheen of sweat over my forehead and that’s before I even make it onto the chairlift. I still get touch of anxiety when I look up at the side of a white washed mountain but years of snowboarding has helped keep that fear at bay. That however that doesn’t mean I am about to go jumping off a bridge in the depths of South America or does it?

Bungy jumping is one of those things I placed on that list “Things I would NEVER do”. I am ashamed to admit it, but I do have such a list. After a day of mountain adventures, a group from our hostel exchanged stories over dinner and a few cold beers. We were in Banos in Ecuador, a city with adventure tours for even the light hearted. The talk of town was however the bungy jump and while I had heard stories of jumpers in the hostel, it had not even crossed my mind that I might become one of many taking such leap of faith. Somehow our discussion turned into a pact and before I knew what’s happening I have sworn on the life of my first born that the very next day I would be bungy jumping from the side of a bridge.

I’m not going to lie; a part of me was hoping our pact would get swept under the carpet. It was the first thing I thought of when I woke in the morning and I didn’t dare mention it over a breakfast. My wishful thinking was quickly crushed by one of the brave, the pact was unbroken. I got through the morning by not thinking about the inevitable, when the jump was mentioned I would smile and nod. Our group was broken in two, those of us who were feeding off the adrenalin and those of us that chose to pretend it wasn’t really happening.

Once on the bridge my fear felt like a heavy weight was crushing the air from my lungs. In that moment I knew three things; 1. I couldn’t go first 2. I couldn’t go last and 3. I was not about to back out of a pact, made under the influence or not. My best friend Mel who falls into the; I feed off adrenalin category jumped first, she made it look artful. Strapping in was the easy part, standing on the edge of a bridge was scary as hell but forcing myself to jump off the edge went against every grain in my body. On my second attempt I left all of my inhibitions and simply walked the plank, nothing artful about it. The twenty metre free fall was the biggest rush I have ever experienced; it’s an unbelievable sensation defying gravity. Hanging above the river I was overcome with a feeling of disbelief, did I really just jump off a bridge? It had only been two days earlier I had a minor freak out in a tree house, no more than five metres high. In less than twenty four hours I had faced one of my biggest fears and overcome it.

It is safe to say I can now cross Bungy Jumping off my list of “Things I would NEVER do” and move it to my unofficial bucket list. The people I meet, the places I visit motivate me every day to be a better person, to take chances and laugh in the face of fear. The question I like to ask is; why let fear rule your life and hold you back? This is not the first time I have faced my fear in the name of travel, I have eaten bugs in Thailand, held a snake in Vietnam, sky-dived in New Zealand and cliff jumped in Malta. When I am asked the question “aren’t you afraid?” I say “yes, sometimes” but it has never stopped me from living my dreams. 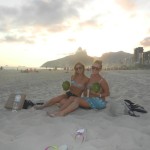 Emma is an everyday girl, from an everyday place in South Sydney, Australia. I have been suffering from the “travel bug” for almost as long as I can remember. I guess you can say I have my parents to blame for my now wayward look on life. Mum is still trying to figure out where the gypsy blood comes from that effortlessly runs through my veins. Travel has always been on the top of my “bucket list”, everything else has always somehow fallen from the same tree. Follow Emma's travels at Follow me Down the Rabbit Hole Follow her on twitter @followmerabbit Follow her on Facebook

It’s Okay To Not Know What You’re Doing

How to Party in a Restaurant in China