How Quitting an $80,000/year Job was One of My Best Decisions Ever

On paper my life was perfect. I made $85,000 in 2009 despite barely turning 25, I paid very little rent to live in a million dollar condo my friend’s parents owned, I could vacation anywhere in the world I wanted to (and did), I was making new friends, and I had virtually no responsibilities. But that was only on paper.

In reality I was miserable. I was surrounded by less than authentic people, I hated going to work knowing I would be repeating the same sales pitch I had been repeating for the last two years, and by the time I was done working out at night I had no energy left for anything else. In short, I was a walking zombie. So I chose a date to quit my job and started saving up money to travel.

At first I was extremely excited as traveling was all I could think about. Unfortunately I had to keep my plans secret for fear of losing my employment and upsetting my roommate’s parents, who were giving me the deal of a lifetime in that condo. Further, when the time got close and I did make my announcement, things didn’t get any easier.

One of my closest female friends thought I was committing career suicide, and interpreted my desire to leave as me wanting to get away from her and her brother (my roommate). What this girl failed to realize was that this was the hardest decision of my life, so when she decided tried to make me the villain and threw tantrums and guilt trips my way, I let the friendship fade. Sadly, the relationship was never recovered. On top of my relationship drama, things didn’t go as planned at work.

On November 15th I announced to my employer that I would be quitting January 15th. Upon realizing I would only be in the office 19 days over the next two months (because of how much paid time-off I had accumulated), they decided to “let me go.” Upon first hearing this my stomach dropped as I hadn’t hit my savings goal quite yet. Then they told me I could collect government unemployment. Jackpot.

For the next 8 weeks I collected money from the government while living at home. I started doing muay thai (thai kickboxing), caught up on a ton of reading, vacationed in Hawaii, and was able to spend time with my 1.5 year old nephew.

On January 24th I took off on my adventure. 5 weeks in India and 13 weeks in Southeast Asia. For the sake of keeping this article short, let’s just say it was awesome, life-changing, motivational, and the most fun I’ve had since I was a kid going to summer camp.

Since returning from my trip, I have done the following: started my own website selling digital travel guides (and actually sold a few); successfully launched a travel blog (to help sell my guides); accepted a work-from-home sales job with the largest online travel magazine in the world (Matador Network; I didn’t even have to apply, my friend recommended me); taken up 2-step dancing; continued doing muay thai; and traveled to Chicago and Austin, Texas.

This year, between my various income streams, I will bring in less than 40% of what I would’ve made in 2010 (which was quite a bit less than 2009). Despite this, I have managed to save up enough money to travel again and could not be any happier with my career situation. That’s just my career though; my personal life is even better.

For as long as I can remember, I had sleeping problems that were tied to general anxiety. I went through an addiction to downers of all sorts before going on sleeping pills for about 18 months. I could go on and on here, but I’ll just say my situation wasn’t good. I also lacked self-esteem and self-confidence, as what little self-confidence I had was based on my material success.

Upon returning from traveling, my problems virtually melted away. Between getting out of my personal hell and pursuing my dreams, and overcoming all the difficulties I faced traveling India and Southeast Asia alone for 18 weeks, things back home didn’t phase me anymore.

As soon as I got home, my closest friends said they noticed a marked shift in my demeanor. I of course couldn’t see it, but inside I could feel it. I was calmer. I didn’t need sleeping pills or any kind of downers anymore. I felt confident about starting my own business, and for the first time in my life I had the confidence to approach random girls on the street/out in public. It was incredible. While the positive turn of events regarding my career was encouraging, I wouldn’t trade the psychological benefits I experienced for anything.

In conclusion, I hope some of you find inspiration in my story. Giving up a life where I was incredibly materially successful at a very young age was intimidating, and caused intense self-doubt; but I knew I would regret it if I didn’t do it. Listening to my heart, and using potential regret as the measuring stick for my life helped me make one of the best decisions I have ever made.

When faced with tough decisions, I now ask myself one simple question: will I regret not doing this when I die. If the answer is yes, I do it; no further questions asked. (And for those of you who want some inspiration/motivation, check out Tim Ferris’ Four Hour Workweek. The book is jam –packed with examples of people who took the plunge and recovered quite nicely)

So, the next time you dream of taking that exotic vacation, asking that girl at the coffee shop out, starting your own company, etc, ask yourself: will I regret not doing this when I die? If the answer is yes, well, you know what to do. 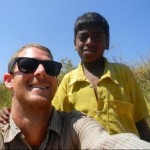 Chris Laub is a budget traveler from Southern California. He has traveled through 14 countries on 4 continents and will be traveling Central America beginning January of 2012. He also owns Backpacker Savings, a site dedicated to helping backpackers save money. They currently offer a Southeast Asia travel guide, and will be offering a Central America travel guide May of 2012.

Starting a New Chapter – Moving on from Travel Blog Success

Day of the Dead in Mexico

Ostia Antica: The Ancient Roman City You Can Feel