How Nomads are Reclaiming the American Dream

Three years ago, fresh out of college, I made the decision to spend a couple years traveling and living abroad.  This period would be a meaningful, but temporary, indulgence of my worldly curiosities.  Eventually I’d come home to pursue a more traditional path- graduate school, career, family, house, etc.  When I told people about my travel plans, the response was overwhelmingly positive.  “Do it while you’re young,” they’d say.

Today, at 26, my desire to see the world is stronger than ever, and I plan to spend an indefinite amount of time doing just that.  I find that my core ambitions have changed much less than I expected.  What has changed since I was 22, however, are people’s opinions of my choice to spend the majority of my time abroad.  Many are still overwhelmingly supportive and positive, but I have also noticed certain undercurrents of judgement.

Any lifestyle that bears little resemblance to the typical mode of existence is bound to be met with a certain air of subtle (or not so subtle) criticism.  The “American Dream” ethos lays out a fairly clear picture of what the path to a successful life should look like.  It’s a recipe, a step-by-step process, which, if followed with relentless care and dedication, will supposedly yield ideal results.  Ideal results, as defined by modern America, include (but are not limited to) a nice home, one luxury car per adult, an investment portfolio, private school for the kids, cruise vacations, a second home in a place with lots of sun, and a third home in a place with lots of snow.  The modern “American Dream” is an umbrella for many ideals- democracy, political and personal freedom, upward mobility, prosperity through hard work, the pursuit of happiness, etc.- but above all else, it is about the acquisition of material wealth.  From this vantage point it is easy to see how a person who fits the majority of their possessions in a single suitcase might come to be viewed as somewhat un-American.

Expats, nomads, and vagabonds are often united by a paradigm that is indifferent to the usual forms of prosperity.  They see wealth as being more a factor of life experience than money or material goods.  It is perhaps unsurprising that folks who choose this atypical stance often find it difficult to find their fit in America.

I truly see nothing wrong with pursuing material wealth, so long as doing so brings happiness to the pursuer, but I would argue against anyone claiming that this is the more “American” approach to life.

When we think about what it means to be an American, I believe we are too quick to lose sight of our history.  Today the so-called “American Dream” conjures an image of settling in- home ownership, career ambition, family life, stability- but it wasn’t always so.  In fact, the American Dream is a mentality with origins rooted in an embrace of uncertainty, a willingness to dance with chaos.

Early Americans were adventurers in the purest sense.  They crossed oceans in pursuit of political freedom and modest prosperity.  They loaded their entire lives onto horse drawn wagons, embarking on two thousand mile journeys they knew to be riddled with potential for death and ruin.  They were explorers by necessity, but explorers nonetheless.  Always and forever in search of greener pastures, they stopped at nothing to improve their lot.

Unfortunately, these creative and daring souls bare little resemblance to many of the overcautious, status quo embracing Americans we see today.  These are the people for whom it is unfathomable to take even the briefest pause from the rat race, for fear of falling a step behind.  Globally speaking, the United States remains at the forefront of ingenuity, but the typical American suffers from a crippling inability to embrace risk or employ creative solutions to transcend their struggle.  So many people are miserable, and yet so few find a way to do something about it.  But hey, the American dream will pan out eventually, won’t it?

What the United States needs now is a rekindling of the pioneer spirit.  It needs people who are willing to reassess the definition of prosperity and embrace alternative lifestyles as viable paths to success.  Indeed, I am talking about cosmopolitans with ambitions for travel and an expanded world-view, but I’m also talking about artists, farmers, writers, teachers, doctors, parents, and businesspeople.  To be a pioneer is to think outside the box, to break free from the confines of complacency, to see things for what they are.  It is about free thought, and while free thought demands courage, there is nothing elitist about it.  Anyone can be a pioneer, and everyone should strive to be one in their own small way.

In the interest of progress, we need to encourage people who choose to do things differently.  We rely too heavily on straight lines and are too quick to suppress or dismiss those who attempt to view the world from an atypical vantage point.  History tells us that the world needs the weirdos, wanderers, iconoclasts, dissenters, and revolutionaries every bit as much as it needs the unquestioning soldiers of capitalism.

The great leaps of humanity have always hinged upon the willingness of people to step out into the darkness and uncertainty of the unknown.  Greatness is reserved for those who dare. 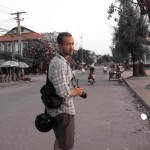 Andy Baxley is an American vagabond with an open-ended life plan. He aspires to spend his years visiting, studying, photographing, and writing about far off places. Follow him at The Nomad Diary.

What it’s Like to Know Spanish in Latin America