Africa. Just saying the name puts a massive smile on my face.

One of the reasons I love Africa so much is that the names of all the places I’ve been to there sound so phonetically pleasing…stick with me on this one folks. All the places I’ve spent time in either end in an ‘ooooh’ ‘aaaaaahhh’ or ‘eeeeeee’ which makes me smile just saying them; Kenya (ahhhhh) Nairobi (eeeeee) Kembu (oooooh) Uganda (you get the picture)… Leeds, the city I live in, just doesn’t have the same ring to it…sad face.

I’ve been to East Africa three times so far and hope to go back time and time again. Two of those visits were spent teaching English in local schools, in classrooms consisting of me, wooden desks and at least 40 amazing children…quite a challenge, but one I can’t wait to do again.

The first time I touched down on African soil was in 2007, when I taught English in a rural village in Uganda.

My beautiful home in Uganda.

I lived in the tiny village, part of a group of the first ever Westerners to meet the locals, a pretty amazing experience. By the end of my stay there, I felt so at home; leaving Uganda was one of the hardest things I’ve ever had to do. It made such a difference to feel more than a tourist, and part of a community.

I struggled coming back home in 2007. I was excited to see my family at the airport, for about ten minutes, and then I wanted to go back on the plane. The people I’d met had so little, some had never even left to go to the next village along; yet they were so welcoming, friendly and had such community spirit, something I’d never seen back home in our over-developed UK. One man told me that what I’d paid for an iPod could put a child through school for a year or so.

I had no electricity, running water and the village had no real roads to speak of, but I can honestly say that I was so content and happy living there – a genuine happiness that is hard to replicate back home.

Goodbye Uganda, I miss you.

My second visit was to Mombasa in Kenya, this time it was a shorter trip incorporating a two week teaching placement in a really basic school.

The school is located in a part of Mombasa that was hit badly in the Kenya riots of 2007. My placement involved teaching in the school for the morning, then heading to the adjoining children’s home to help out wherever you are needed for the rest of the day. This might involve washing clothes, food preparation, and mural painting or helping with homework. The children’s home housed 16 children who have either been abandoned or orphaned; all have been affected by AIDS/HIV in some way.

What humbled me the most was that the whole project, school and home, was run by two ex-street boys who were the same age as me, 25. These places are not government funded, and every day they fight a losing battle for donations to keep the roof over the children’s heads. Walking away from that place was a massive struggle too, but I keep in touch with the project and aim to go back very soon.

I lived with a local man during my stay, which was a great way to see more of Mombasa and learn more Swahili. Mombasa is a crazy city and well worth a visit; great nightlife, amazing food, friendly people, loud music, horns blaring, beautiful beaches a short drive away…

My third visit to Africa was as a bona-fide tourist, taking on an overland tour from Kenya, through Tanzania and finishing in magical Zanzibar.
If you’re sceptical in any way about going to Africa, I’d do the opposite of what I did and start with a tour like this; fully supported with local tour guides to help you every step of the way.

Yes, I am wearing socks AND sandals here. Whatever.

My issue was that I’d felt more than a tourist previously, so seeing myself through local eyes as nothing more than a passing visitor was tough, but you can still make an impact in a short amount of time on an overland tour by acting responsibly, respectfully and by helping the local economy. I’m not saying that it’s a negative to be a tourist in any way, I’d rather people experienced a place in the time they have available than not at all; but it’s hard to get a real picture of a place in a few days.

My Mum frets a lot when I tell her I’m getting on a plane to Africa, mainly because of outdated safety concerns. When I told her I was going to Uganda, she mentioned its turbulent past, but I reassured her that after 30 years things were calmer now!

The truth is that I’ve generally felt safer living in Uganda and Kenya than I have anywhere else. I’ve been part of a community and it obviously
helped that I stuck out like a sore thumb! People were looking out for me; they knew my name and called out ‘teacher Katie’ as I went on my way everywhere. Of course crime happens worldwide, it’s a sad fact, but smaller communities feel safer, and it never hurts to exercise common sense at all times!

Don’t be put off of East Africa by what you hear in the news, I can guarantee that things are different on the ground in a lot of the places. I’ll happily recommend it to anyone looking to get off the beaten track and try something new.

Plus you’ll get to spend time with these dudes! :) 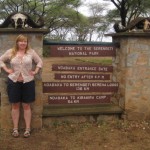 Katie Baxter is Africa mad, and it's all because of the Lion King movie. At any opportunity she will regale you with 'another Africa story' and tell you about the time she contracted typhoid in Uganda and lived to tell the tale. Her mission in life is to fill up as many passports as possible! Follow her on Katie Twenty Something.

Why it’s impossible for you not to like chinese food

Do travel writers get laid more than the average person?

I have officially been recognized as an Italian!

Day of the Dead in Mexico

Being a Local in Berlin