The Sadhu moved directly into my path and mimed eating, moving his dirty fingers and broken nails toward his mouth. I stepped around him as though I hadn’t seen him, as though he was a rock or a branch or donkey shit that existed only to be avoided. The three Nepalese villagers behind me were neglected entirely by the holy man, as he went in search of another white western piggy bank.

Nepal is a very poor country. The UN figures state that 70 percent of the country live on less than two dollars a day. You won’t find people buying ever-increasingly large flat screen televisions here. And while Nepal is physically small (half the size of Colorado) it has a population of more than 30 million people. There are vasts amounts of hungry people here, people living so far under the western idea of poverty that things like electricity or shoes are a luxury beyond imagining.

The average tourist in Nepal lands with at least a couple of thousand dollars saved up, and will be heading to India or to Thailand or to China next. While westerners spend very little in terms of their home country prices, it’s enough to create a thriving tourist industry. And yet every responsible traveler knows (or quickly learns) to resist that Santa Clause impulse. While giving out money, pens, or food seems like a nice gesture, it hurts much more than helps. Most importantly, the children asking for sweets and the Sadhus begging for alms aren’t starving, begging for a crumb to save their lives. They’re just responding to a conditioning that portrays Westerners as a free spin on the slot machine–win or lose, it cost nothing to try.

Every other kid in Nepal will run up to tourists, hands held out. The lucky ones whose parents own a shop learn their lines at an early age, “Come in. Just look, just look.” Some ask for “bonbons,” “sweets,” or “chocolate.” Like children, Sadhus single out westerners as wealthy enough and gullible enough to pass out money or food. Unlike children, Sadhus have a long tradition of living from alms only. This is commendable as part of a long spiritual lifestyle, but why then do they only ask alms of foreign tourists? Price-gouging for tourists is common, of course, in developing countries–shopkeepers and taxi drivers will charge anything from 2-10 times the going rate for locals. With so many needy, however, trying to give everyone what they want would bankrupt you and only encourage more begging and price-gouging.

It’s a tenuous situation–an impoverished populace, yes, but a savvy one too. One that has perfected the art of fleecing Westerners. What is the correct role for the responsible traveler to play? What is the best role for Westerners in developing countries?

While some travelers try their hand at anta Clause, many more try a holiday role of another nature–Scrooge. They try to get by on as little as the natives; haggling for long minutes over something as little as 10 rupees/13 cents. This parsimonious approach isn’t much better–it makes Westerners look selfish and puts very little much-needed cash into the local economy. It can also change your trip into a sort of arms race of poverty. Some travelers I met in India sleep in the streets, eat a few handfuls of boiled rice each day, and drink only local water in order to avoid paying inflated tourist prices.

The solution many Westerners find is to give to charity. This isn’t a perfect solution–many charities skim a fair bit of the top. It is hard to find out how your money was actually used as well. There is also the kudos factor–many people donate to charity to feel better about ourselves, to mention to our friends how involved we are. Still, the rewards of charities far outweigh the negatives and you can really make an impact if you choose the right place. There are no shortage of organizations that need and will take your money–in Nepal, ACAP is a conservation effort that does everything from maintaining trekker trails to helping villages gain electricity.

Maybe the best thing to do is donate time. While biking around a lake in Pokhara, I met Vishnu. He is charming Indian gentlemen who runs a school. A group of a dozen or so Australian volunteers had just left after a month of volunteering, and he said there wasn’t a dry eye amongst student or staff when they left. In addition to helping the children learn English, teaching them to ride bikes, and just generally exposing them to another culture, they did things like donating some of their favorite children’s books and building a basketball court. Time seems a currency much better spent than money, and I think that’s the most important thing I’ve learned. Even if you don’t have a month to spend, getting off the tourist trail and interacting with the people is more rewarding for everyone.

It has been said that without shoes, there is no Shakespeare. The lack of literary and visual artists in places like Nepal is a testament to that, though it’s changing for the better. Taking it further, without rice there are no shoes. What need of material things when you can’t fill your belly? Hunger is an an issue that large parts of the world deal with daily, and it’s difficult for the western traveler to know how to help. You don’t have to leave your own country–hunger is as ubiquitous as Che Guavara t-shirts. It’s a cliche, but even small action can make a difference. Christopher McCandless, of whom Into the Wild was written, used to pass out burgers to homeless people in Washington DC. The most important thing: Human interaction, the gift of time, is far more valuable than throwing money at a problem and patting yourself on the back. 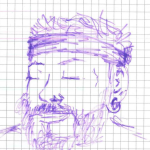 Ahimsa Kerp has lived on four continents, and been around the block long enough to collect an arresting assortment of useless information. His screenplays have won awards, his travel writing is published on Bootsnall, Airtreks, and the Matador Network, and his spec fic novel comes out in the first quarter of 2011. You can follow his blog at Are We There Yeti? and Twitter at @ahikerp

How I Helped My Little Brother Conquer His Fears