I never really thought Bangkok could come across as ‘normal’, but touching back down at Suvarnabhuni after three weeks in Burma was a shock of modernity and reliable electrical supply. Next door, it feels as though the 1950’s have been vacuum-packed in to the twenty-first century. As you might expect, this made transport a novelty, and a blast, through the course of my trip last March and April.

I’m a huge Paul Theroux fan, so the long-distance train journeys in Burma were among my most sought-after experiences. They didn’t disappoint. The landscape was made for such steady motion; rocking somewhat under a few broken ties, with no power lines crisscrossing the rice fields, the closest thing to a cell phone tower the odd golden pagoda sticking up from some place of reverence, gave a taxi-meter pace to my view of the countryside. Signalmen at checkpoints dictated our pace, standing stock-still in the heat, the only breeze rustling their flags the one being brushed aside by the locomotive. At stops, locals armed with produce jumped aboard, selling pastry, fruit, and Mandalay beer, before hopping off as we gained speed.

But nothing beat the ferry.

The Irrawaddy River bisects Burma, running nearly dead centre. It is the ancient artery by which the country has moved, invaded, been invaded, traded, swum, eaten, and drank. It begins as a trickle high up in the Burmese slice of the Himalayan mountains in the north, easing down into it’s silty and opaque bed as it approaches the massive inverted-tree shape of the delta at the Indian Ocean, two thousand kilometres from it’s inception.

Recent industry under the British utilized the river for logging and trade purposes, but it has always been the conduit by which one moves through the country. Orwell’s fictional Kyauktada district from Burmese Days sits riverside. Even today, with busses finally beginning to crack the river’s monopoly on motion, shallow-bottom river boats are the main connection with the outside world to most villages in the floodplain. They make bi-weekly runs to and from the myriad of settlements along it’s course and through the dozens of channels constituting the delta.

I had intended to head towards the western coastline after two days touring Rangoon. What I hadn’t counted on was a late night with Johnny Walker and some ambassadorial staff the previous night at 50th Street Bar and a speakeasy in the northern suburbs. Luckily, down at the docks, my ship didn’t sail until five that afternoon. I was able to put most of my gear in to storage at the seventh-floor Chan Myaye guesthouse, before easing out into the afternoon heat, armed only with my small pack, hiding the hangover behind my sunnies.

As a foreign ticket-buyer, you are nailed for a 800% markup. Given the inability of accessing money here (there were no ATMs in the 50s, after all), this has potential to throw your budgeting off…but to be fair, $40 for a 24-hour trip isn’t unreasonable. They kit me out with a private room and two beds for the overnight journey. We eased off the dock and away from the dust and noise of Rangoon right on time., heading west along the eastern channel of the Irrawaddy Delta, towards the confluence of channels at Yandon.

The bustle of Rangoon very quickly faded to gentle rice paddies and the odd disused infrastructure project (a rail bridge here, an oil dock there). The water, no longer broken by sampan traffic, settled to an evening calm and reflected the sun’s light. As the only tourist, I had ‘honorary foreigner’ status all to myself, and sitting up forward on deck, under the eyes of the pilothouse, a roster of the curious joined me. I was offered some supper – a spicy cous-cous-esque dish – as I hadn’t brought along anything more than a few pastries, long gone (and two beers). Our view to the west, unbroken by the low land of the delta, gave us a great view of sunset.

As darkness fell, we began to reach some of the smaller outposts along the riverside. There, we touched the dock, shuffled the passenger list, and gained several hawkers. Very loud hawkers, who ran the length of the deck selling eggs, the obligatory soft pastry, and tea encased in two-litre soft drink containers. Still feeling the after effects of the previous night, I paid a wide-eyed young girl 1000 kyat for some tea. She handed it over like a hot potato and ran away with a screech. Somewhat unable to feel much fatigue in this atmosphere, I sat on deck in the darkness, smoking a cheroot, watching the mate illuminate the black riverbank with a spotlight.

We continued our unhurried pace all through the night. When I awoke, we were bumping against the dock in Labutta. The river channel was somewhat more narrow now, and the bright sunlight revealed a brilliantly eclectic waterfront: beached fishing boats on the muddy shore mingled with rotting palm fronds, fishermans shacks, while the requisite police boat rocked gently offshore, a police car’s lights affixed precariously above its outboard. By the time I roused myself, almost the entire roster of the boat had offloaded. Evidently, this was the main destination for most passengers. I bought some breakfast from the dock and asked one chap about the story behind the fishing boats beached up on shore.

Cyclone Nargis wrought destruction in the delta in 2007, and became known for the headaches international aid donors encountered with the junta. As a lasting effect, the intrusion of salt water threw off the saline content of the water in the delta, changing the pattern of fish migrations. Apart from agriculture, the region depends a great deal on fishing from precarious craft, which after we touched off, the ferryboat was obliged to perform acrobatics to avoid. It offered warning with the foghorn, but there were some close calls.

For the remainder of the morning, we eased our way north along the curving Pathein River channel towards Pathein, my jumping off point. The heat was terrific. You learned to be very mobile, as the undulating course of the river meant your hard-earned shade was constantly lost. A young schoolteacher approached me. She spoke reasonably good english, and we discussed her country’s internal politics and the odds of reform (elections were approaching in three weeks) and of course, Aung San Suu Kyi. She gave off an air of cautious optimism.

“But do not want too fast change. Myanmar has to stay…for Burmese.”

Very sage. As we parted, she kindly found me a mototaxi for the two-hour trip out to Ngew Saun beach, and asked my age. 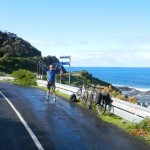 Blyth has been traveling the globe for three years, chasing the sun and seeking a pirate's life. He records his movements at circumnavigonzo.com.

Behind the Scenes at Summerfest 2013