Inevitably, as you travel, you meet other travelers and begin to swap stories. These stories encompass little bits of information about traveling, food and general observations about the culture. Of course, these conversations almost always touch on bathroom stories: stories about the traveler’s health or just about the general state of the bathroom itself. So, here is yet another bathroom story to add to the pile.

My sister and I were on yet another bus trip in Malaysia. I was sleeping pretty soundly, for being on a bus, when the bus driver pulls over at a rest stop in the middle of nowhere. It’s something like 2am and I sleepily determine if I need to use the toilet as I look out the window to assess what I would be dealing with. It didn’t look that bad: there was a little dining room full of Malaysians watching the World Cup and a little building that housed the toilets immediately to the left. Rachel and I got off of the bus and followed the rest of the Muslim Malaysian women to the toilet designated for female use. As we waited in line, my sleepy brain began to register that these Muslim women were rolling up their pant legs and showing more skin than I think was allowed before entering the toilet. This should have let me know that something was up. I also noticed that there was a concrete wall going around the entire outhouse and that water was coming out from under every stall door. Finally, it was my sisters turn. She opened the door to be greeted by a running shower and started to silently giggle because their wasn’t even a hole to squat over: the floor of the little stall was at a slant and the running shower was meant to push whatever business that was being done in their out under the door. I didn’t have a shower: no, I had the pleasure of being able to directly use the through.

After we had finished, we moved away from the outhouse as fast as we could and gingerly stepped over the running river of excrement.

To be fair to Malaysians, this was the only gross bathroom experience we had there. For the most part, our bathrooms were clean and not lacking in plumbing.

Tell us a toilet experience you’ve had in Asia. 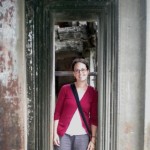 When I was young, I would sit and look through travel books while telling my mother all sorts of nonsense about all the colorful pictures. Now, I am twenty-eight, a certified high school English teacher and have traveled to ten countries. My love for traveling has given me a unique perspective and endless fodder for writing colorful stories set around the world. I am currently settling down in Mid-west America again hoping that my backpack will be strapped back on sometime in the next couple of years.

Picture framed in a Chinese home