Last summer I was walking to the beach in Alicante at 1:00 in the afternoon when a drunk British man dropped his trousers and peed into a trash can on the most popular street in town. Do not let this be you. These days it seems everyone and their dog wants to come to Spain, and I sympathize completely. There’s a reason foreigners bombard this country, particularly in the scorching summer months. The weather, the beaches, the sangria, the nights out that end well into the morning…it’s all so tempting that it’s almost difficult not to ditch your own country for a few weeks (or, in my case, years) and visit the land of paella and calimocho (red wine mixed with Coca-cola—not as disgusting as you might think). But there’s no reason to act like an idiot and certainly no reason to reduce Spain’s culture to the availability of alcohol, so my advice to you, world traveler, is this: Come during Easter when you can see Spain and its people truly come to life.

Spain has had a long and sometimes deserved reputation as a strict Catholic country, but as a resident of two years, I’ve seen that this assumption isn’t exactly accurate. Sure, I still confuse most of my female students because they’re almost all named Maria-something and many boys are named after Jesus himself, but for the most part religious fanaticism seems to be a thing of the past. Easter remains a significant event in Spanish life, but it’s not only an emblem of Spain’s religious past. More than anything it’s just a celebrated tradition.

The Spanish Semana Santa (Holy Week), like all Spanish holidays, is a spectacle. Other festivals may be more flamboyant, like the citywide bonfires of Valencia’s Fallas or the running with the bulls at Pamplona’s San Fermín, but the Easter celebration has a kind of quiet grandeur that makes Spain Spain. This is a week (two weeks in some regions) in which all schools are closed and almost all workers have significant time off. In practically every city and town in the country, locals dress in costumes of white, black or even purple robes. They carry large wooden crosses and some support floats bearing statues or sculptures of Jesus or the Virgin Mary.

As an American, this famous Spanish tradition is a little hard to watch, at least in the beginning. When I got a first glimpse of these people dressed in costume, my whole body contracted in anger. I wanted to ambush them and rob them of their hate-mongering wardrobe. It’s a natural reaction, perhaps, for those of us who grew up learning about the atrocities committed by the Ku Klux Klan. We are all familiar with their outfits—the cone-shaped hat and the white robes. It’s no secret that Spanish Semana Santa outfits, at least the white ones, resemble almost exactly those of the KKK. Try not to read too much into it. The Semana Santa parades existed long before America was even a country.

Perhaps parade is not the best word to describe what you’ll see at Easter. No one throws candy. No one applauds and shouts. The people walk at a slow, mournful pace, often barefoot with chains dragging from their ankles. It’s eerie the way the participants mask their faces, hiding whatever emotion they feel as they morosely navigate the city. During other religious parades in Spain, you’ll see the people dressed in their elaborate costumes talking on their cell phones, smoking cigarettes or even pipes, and, one time, I swear, eating a sandwich and holding a can of beer. During Alicante’s Moros y Cristianos (Moors and Christians) parade, the men and women brandishing swords or carrying elaborate fans were chatting and laughing as they marched throughout the city. Not in Semana Santa. Besides the music, it’s a silent affair. You don’t have to be Catholic or even a believer in any higher power to see that there is something serene and beautiful, albeit intimidating, about these processions. Don’t discount them, even if you think they’re a way for Spain to hide some of the nastier aspects of its religious past.

Last year I happened to be in Madrid for Easter. The Nazareños, the people who dress to depict the people of Nazareth, marched through the principal streets of Calle Atocha and Calle Mayor, passing McDonalds, Burger King and Top Shop. The processions are a centuries-old tradition and while watching, it’s easy to forget not only where you are, but when you are as well. Then, you take a photo and it’s almost impossible to escape the familiar logos of so many famous chain stores and restaurants. It’s almost comical how the old attempts to blend with the modern, yet this is a tradition that is surely here to stay.

Madrid may be Spain’s largest city, but it’s not the best place to be at Easter. The most famous and intricate processions take place in Seville and Málaga, both located in the Southern-most region of Andalucía. If you’re in Spain during the Easter holidays, try to head south. Hotels and hostels may completely book up months in advance, but with the number of ESL teachers currently living in Spain, chances are you have a friend who lives somewhere near the area.

The Semana Santa processions may not be for everyone, but Spain is, and until you witness this aspect of its culture, you won’t really know this country. It’s about a lot more than late-night dinners, flamenco dancing and drinking until 6am, although that stuff’s fun too. If you really want to experience Spain, do something that Spanish people actually do. I don’t know too many who run with bulls, but most Spaniards I know do watch the Easter processions, and usually it has nothing to do with their spirituality. For many it’s about tradition, or maybe they just want a few hours of peace and (relative) quiet. Spain has had to bend a lot with the influx of foreign tourists. In touristy cities like Barcelona and Madrid, restaurants open early to accommodate foreigners, even though no Spaniard would ever eat dinner before 9:30pm. This is one aspect of their culture hasn’t had to change for tourism. Spain welcomes tourists to come and watch this virtually untouched celebration, but please, while you’re here, try not to pee in any trash cans. 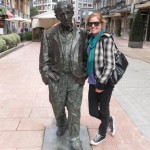 Lindsee Gregory has been in love with Spain since she studied abroad in Oviedo in 2007. She works as an English teacher in Alicante. For two years she has enjoyed the relaxed Spanish lifestyle, and for now she's enjoying not knowing what to do next. She lives for travel, and her favorite places (so far) are New Zealand and, of course, Spain. When she's not in Europe, she goes home to Portland, Oregon, where you will find what is without a doubt the best beer in America.

How Quitting an $80,000/year Job was One of My Best Decisions Ever