A Reluctant Englishman on the Trail of a Living Saint

“I am taking you to see a living saint,” He said

That was how this little adventure began. Apathy on my part and pity in the eyes of my travel companion. Apathy because I didn’t believe in saints. Pity because my friend knew more than I did.

I have always been fascinated by India. Not so sure I wanted to actually visit, but I had somehow found myself with a ticket. And here I was.

I was travelling with a companion who had been to India many times. He knew India. I didn’t. Our trip took us to the normal hot spots. Delhi, Mumbai and Chennai.

It also took us to Shirdi.

Shirdi is a small town in Northern India. It is one of the holiest places in the Hindu religion. My friend knew this. I didn’t care.

“I am taking you to see a living saint,” he said

When I awoke from my insect plagued sleep it was time to visit the ashram where this living saint was supposed to reside. I was not particularly happy. In fact I was pretty pissed off. I didn’t come to India to visit a saint. I came to India to see the Taj Mahal, to enjoy the cuisine, to mingle with its people. My friend was having none of it. We were off to see this saint of his, and that was that.

As we checked out of our hotel (if that is what you could call it, I would prefer to call it an insect infested sh*t hole) we started our drive to the ashram. By this time I had given up persuading my friend that we should skip this little detour. As we entered the gates it didn’t feel very saintly.  It actually felt very normal. Where were the saints I jokingly mumbled?  I received an icy stare in return.

We entered a large and crumbling hall where there were hundreds of children meditating. Four adults were sitting cross-legged on a raised platform at the front. ‘I wonder if any of these chaps are the saints’ I mused. They didn’t look very saintly. I concluded that these four people couldn’t possibly be saints. I mean there was no halo. No glowing aura shining through their heads. No chirping of humming birds. No. They weren’t the saints.

As I wiled away the stillness with useless musings the meditation came to an end. Still no sign of a saint.

We were ushered into a small room where one of the men who had been at the front of the large hall was sitting on a small carpet. Cross Legged. My friend told me this was the man. This man was the saint. This was why I slept in a bug-infested room. I was not impressed.

Babaji as he was called instructed us all to sit down and we were off on another meditation journey. Another one? I just finished wasting the last one musing about meeting you! Can’t we just go home? We have met the saint. The saint has met me. Lets end this and continue our journey. I dared not voice this of course. My friend seemed in awe.

So, off we went on another meditative experience. But this time I rebelled and opened my eyes. In more ways than one it turned out.

What follows is my exact journal entry I wrote that night:

“I have just come back from an ashram where I met a guru called Babaji. As I was sitting in his room watching him meditate it dawned on me that this chap was probably made from the same cloth as the greatest teachers in the world: Jesus, Buddha and Mohammed.  I know this sounds ridiculous. But it feels so true.  It was a powerful and surreal moment. It was like this man was just not there.  He had completely dissolved his mind and was living from a powerful place of love. A feeling place way beyond my comprehension. A feeling place that touched everyone in that room.

He had an amazing aura about him. I really felt I was in the presence of something spiritually magical. In the car journey back to the hotel my friend was saying that Babaji’s presence simply reflected our true selves. A self lost in the frenetic world of the 21st century. His presence was simply the reflection of our untapped and purest potential.

Babaji’s soul was running the show. His ego non-existent. He had transcended.

Being in his presence was momentous. It brought me face to face with my true self. It was intoxicating. Life changing. I really feel like I have just been touched by God. “

“I am taking you to see a living saint,” he said 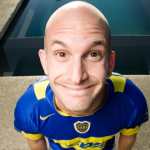 Leon Logothetis is a global adventurer. He has visited more than 50 countries and traveled to every continent. He is the host of the TV series 'Amazing Adventures Of A Nobody', which is broadcast across the world by National Geographic and, over the course of three seasons, sees Leon cross America, the United Kingdom and Europe on just $5, 5 Pounds, and 5 Euros a day respectively. Leon has also documented his travels for numerous media outlets including Los Angeles Times, San Francisco Chronicle, Outside, Good, Psychology Today, and 90 Mins. His new book, Amazing Adventures of a Nobody, is in stores now. For more info visit Leon Logothetis

Visiting the Middle of the Earth in Ecuador

What I Learned About Luggage from Working at a Luggage Store

What I Learned from Backpacking the World at 16

The Art of Roaming Cooking