As a popular budget vacation destination, Mexico is often looked upon for its beautiful beaches, great weather and strong tequila. Unfortunately, it has a bad reputation as a dangerous city. In recent news, the media shows the devastation of Mexico’s drug wars, kidnappings and poverty. It gives Mexico a bad name, but luckily, backpackers still consider Mexico a place to see. Since it is such a questionable destination, here are some things you might want to know. 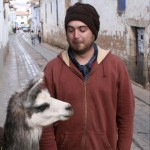 How to Behave in the Middle East or any Conservative Country

How I Organize My Photos

How Backpacking Has Changed My Life