Indonesia is a vast, sprawling island nation in SE Asia with well over13,000 islands. Of Indonesia’s dozen or so major islands, Bali, Sumatra and Java are the most famous among western travelers.

The nation of Indonesia was formed at independence from the Dutch after WWII from the rather forced union of formerly independent, completely different cultures and kingdoms established on the various islands.

Not surprisingly then, Indonesia has a huge variety of delicious cuisines. In Bali the most widely available and popular dishes come from Bali, Java and Sumatra. While Bali’s thousands of tourist restaurants do offer a standard selection of Indonesian foods, the dishes generally are altered to what the owners believe western palates prefer. In addition, most Indonesian foods aren’t offered at all.

To dig into Indonesia’s authentic and best cuisines, you’ll have to venture out to local eateries (called ‘warung’ or ‘rumah makan’), night markets and street stalls. At those places Indonesian food tastes much better than at tourist restaurants and costs a fraction of the price. Anyhow, isn’t that part of the fun of traveling to new countries?

Here are my favorite Indonesian foods, ones you won’t find in tourist restaurants. Try them next time you’re in Bali.

‘Bubur’ is rice porridge. It’s very similar to American Cream of Wheat, a wet couscous or a rice version of oatmeal. Bubur is popular with Chinese all over Asia who call it ‘congee’. Thais call it ‘Khao Tom’ (rice soup). It’s served in China, Hong Kong, Japan, Thailand, Malaysia, Singapore and Indonesia under various names. Bubur is also a common food served to anyone who’s sick with a cold, flue or stomach upset. It’s the Asian version of ‘chicken soup’.

The server first fills a bowl or banana leaf with a heaping portion of bubur. On top, she places shredded, spiced chicken and garnishes. Each shop makes its own version. The most common ingredients are whole peanuts, sauteed greens, sliced shallots (spring onions), roasted onions or garlic, and a small bit of broth. Some shops add a shredded coconut broth.

To eat: Stir it all together and dig in. Locals usually add a generous portion of chilies and/or hot sauces. That part’s up to you.

Gado-gado is a Balinese dish that sort of breaks my rule: It is actually served in many tourist restaurants. However, that gado-gado is an entirely different entity from Bali’s real gado-gado. In tourist restaurants you’ll be served a plate of white rice, mounds of steamed vegetables, peanut sauce and a few local chips. That version is delicious, too.

However, the real gado-gado is more like a Balinese answer to potato salad. Instead of potatoes, cubes of dense sticky rice are used. Instead of mayonnaise, a spicy peanut sauce it added. Various vegetables and spices are tossed in.

Gado-gado is usually served at street stalls and small shops. It’s always made to order and it’s quite fun watching them make it. First the sauce is created in a large flat mortar with stone pestle. They crush a handful of peanuts, pour in molasses-like-sauce, then add chilies (when ordering, watch that!), garlic, a dash of sugar and a few other spices.

After the sauce is nice and creamy, a dense sticky rice is cut into cubes and added. Some greens are tossed in. Sometimes they add boiled egg, tofu and/or boiled potatoes. Fresh bean sprouts are always thrown in at the end. The mix is all mashed around together then packaged up in paper or banana leaf for take out. You can also eat there if they have seats.

* Be sure to tell them ‘not hot’ unless you want your mouth and lips burned off. ‘Tidak pedas’ is the phrase. I usually can tolerate ½ of one small chili. To be safe if you’re timid, skip chilies entirely.

To eat: I usually use a spoon or fork to eat gado-gado. Locals often eat by hand.

Soto ayam is a chicken noodle soup originated in Java, with a very distinctive blend of spices and ingredients. It starts with a dark chicken broth and a portion of very thin boiled rice noodles. Shredded chicken, sliced tomatoes, boiled egg, sliced cabbage, onions, and a few spices are thrown on top. A Balinese version adds a grated coconut mixture and skips the tomatoes.

To eat: Mix it all together and dig in. Most Indonesians add various sauces and/or chillies to spice it up even more. Personally, I skip the sauces altogether since it’s quite flavorful as is. Up to you.

Kue are traditional sweets made of rice flour and/or agar-agar (a seaweed that makes gelatin). Dozens of varieties of kue are available but can broadly be categorized into cake-like sweets, firm pudding-like sweets, jelly-like sweets and deep-fried sweets. Many Balinese kue are the same ones that you’ll find in Malaysia, strange as that may seem.

Some kue are sprinkled generously with natural coconut flakes, others are drenched in brown sugar syrup. Some are filled with a sweet coconut mixture or crushed peanuts or yellow bean paste. Fried kue include fried dough (much like donuts), batter-fried bananas and sweet potatoes, and glutinous rice balls filled with peanuts or bean paste.

Sadly, kue seem to have pretty much disappeared from south Bali. But outside of Bali’s southern tourist sprawl, you’ll find them easily. In villages, they’re sold at morning markets or road-side stalls. In cities, you might also find them at a few local bakeries and shops. The most delicious kue bakeries I’ve found in Bali are located in Seririt City, on Bali’s north coast, and in Negara city, in Bali’s southwest corner.

Roast suckling pig is a distinctly Balinese specialty. The majority of  Indonesians on other islands of the sprawling archipelago, being Muslims, don’t eat babi guling. Some tourist restaurants might offer it as a ‘special delicacy’ to be ordered at least one day ahead of time, as if it’s super special.

To be honest, it’s a big gruesome. The whole poor roasted pig is laying there on display right beside its own chopped up flesh, skin and fat. His eyes stare back at you blankly from his partially-hacked up body while you’re waiting to be served. Usually it’s a carving in progress, so every once in a while the server has to stop packing up meals to go hack off some more meat, peel off some crispy skin, or whack off a body part.

It has become harder and harder for me to patronize babi guling shops with such horrors on view. We westerners are so accustomed to never seeing the gory reality of meat-eating habits, so it can be really difficult to confront. But if you can get past the poor pig lying there, you’re in for a taste treat.

To credit the Balinese, at least they do use every single part of the pig they’ve just roasted. They eat the crispy skin, the fat slabs, the meat, and the intestinal organs. That’s a lot more than can be said for western societies.

Most Bali Guling shops serve a whole smorgasbord of dishes made from the flesh, blood and organs. One or two vegetable dishes are also on offer. Each customer can get a standard mix — a bit of everything — or can specify which dishes they want. I usually only get the lean meat, a bit of crispy skin and rice.

Have you tried any of these tasty Indonesian foods?

If not, which would you most like to try? 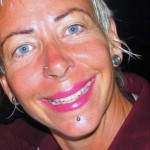 Lash, an expat American who's been traveling the world solo since 1998, immerses herself in nature, culture and the arts of countries she visits. She aims to inspire others to follow their dreams by sharing her cultural insights, narrative adventure tales, travel tips and photos at LashWorldTour.

Lash is the author of two adventuring guidebooks to Bali, which are available in 3 eBook formats on LashWorldTour and in print on Amazon: Hiking in Bali / Cycling Bali.

How To Keep Your Expensive Equipment Safe On The Road

6 U.S. Breweries Worth a Trip